Thanks to Louis Van Gaal at both Manchester United and the Dutch National Team, 3-5-2 (or 5-3-2 depending on how you look at it) has become more popular over the past few seasons than I think it has ever been before, or at least people are more aware of it.

In terms of explaining this one, it does look complicated on this image but in-fact there is only 4 ‘role changes ‘or positions with ‘challenges’.

To start us off, your full backs (DL/DR) will be asked to get forward as much as they can. (How simple is that instruction?) Defend as you do normally, but when we have the ball, try and get forward. A great example of this could be seen at Everton under Martinez when Coleman and Baines were so prominent in their attacks.

The second ‘role change’ is in regards to you centre backs (DC’s) who you will ask to push a little wider and potentially look to receive the ball from the goalkeeper. This covers the space of the full backs, which are now pushing forward. Again, they defend as normal but are asked to be a little more expressive when in possession.

To fill that gap in the middle, the third ‘role change’ is that of one central midfielder (MC), who is asked to sit in-between those newly split centre backs and pick up the ball to play out from the back. When defending, this player is asked to be as defensive as possible, potentially to mark an opposite attacking player and join the centre backs. In possession, the player is asked to stay deep with the centre backs and dictate play. Guardiola famously used Mascherano in this position at Barca and Xabi Alonso in a similar role at Bayern.

Finally the last ‘role change’ is that of the wide midfielders (ML/MR) who you would ask to play a little narrower and help out the centre midfield if and when they can, whilst making space for the oncoming full backs.

I’m hoping these are making sense. Here’s the formation after you’ve spoken to the players in question (a maximum of 6 players) 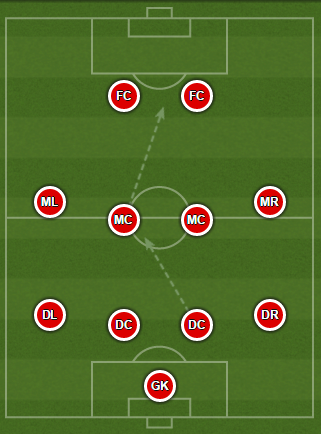 Finally, another example that requires defenders to be conscious of their responsibilities as a defender in order for it to work.

Quite simply in this example, one centre back (DC) is asked to join the midfield when they can, sitting in-front of the other defenders both in and out of possession. One central midfielder (MC) is then asked to join the attack whenever possible. The full backs (DR/DL) could be asked to narrow the back line depending on how you want to be set up.

Taking this as simply as possible, you will have this basic shape:

In the next post we’ll look at 4-3-3 variations, a grassroots favourite.

Here’s Part 9 and the final instalment of my dissertation breakdown. This section wraps up the work so far, including some recommendations for future work and of course, some shoutouts for the incredible people who helped me along the way.

Here’s Part 8 of my dissertation breakdown, which begins to review what we’ve looked at so far. Be sure to check back next week for the final instalment! DISCUSSION TRAITS AND CHARACTERISTICS In interesting element within these strategies is to

Here’s Part 7 of my dissertation breakdown, which is the final analysis piece and picks up some of the other notable findings of the interviews and research, covering other areas that could have an impact on Leadership development. Be sure

Subscribe to our newsletter to get latest posts in your inbox.